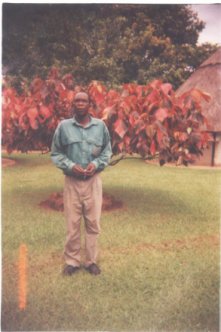 Revival Time Ministry's approach to serving mankind has been holistic; we simply could not ignore the social development challenges people are faced with in the conflict prone zone in which we are situated. We are involved in a number of interventions listed below:

From 1996, and with partnership with Tearfund Netherlands, Revival Time Ministry set on emancipation program for rural women through adult education program. The feasibility study narrowed down women illiteracy as a major cause of women's marginalization, population explosion, household poverty and infant heath related issues. On the other hand we found discipleship process an impossibility among women who could not access any form of Scripture on their own.

Women had already mobilized into women groups. This was an excellent starting point for us.Illiterate ones were sorted into adult literacy classes while the literate ones formed volunteer literacy teaching staff. The groups grew bigger and more numerous within such a shorter time than we had anticipated. We started with 7 women groups in 1996, but by the end of 2003, we had over 93 groups attending classes. However, this progress was suddenly destroyed by the incursion of LRA rebels into the area. Women scampered for safely into Internally Displaced Peoples' Camps.

However, by end of year 2004, the conflict had toned down a bit, and we started all over again. It was a painful process but worthy the effort. By end of year 2005, we had already revived 13 literacy classes.Today, we have 41 literacy classes on session. By year 2000, we had jointly come up with the idea of Household Poverty eradication through Revolving Fund. This was immediately implemented.

This project was one of the most successful social development projects we have ever run before it suffered the same fate as literacy classes in year 2003. Our role was to provide training for volunteer literacy teachers, loan beneficiaries, Area Development Committees members, provide the Revolving Fund and provide post literacy materials.

This project is managed by women themselves under our supervision. Each sub county has an Area Development Committee(ADC) of 14 people headed by a chairperson. The committees are responsible for planning, decision making process and implementation. The committee Chairpersons, the Treasurers and the representative from Revival Time Ministry are signatories to the each Revolving Fund bank account.

There were quite a number of micro-finance institutions in the region, but ours was rated among the best; despite the loan recovery rate at 95%, we maintained an excellent relationship with the loan beneficiaries. This was quite unusual. Normally it is expected that the Micro-finance institution applies maximum pressure on the benefiary resulting into loss of fellowship. For us, the converse was true; many unbelievers received Jesus in the process. This was possible because we gave full ownership of the project to the community while we played a spectators role. 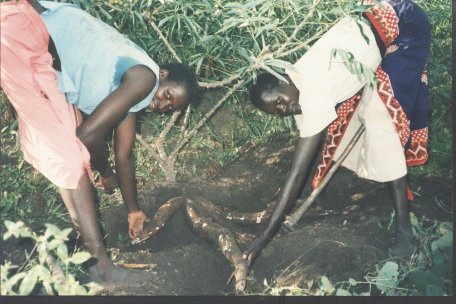 beneficiaries of the revolving fund, harvesting their cassava

Just like literacy, we have gone along way to revive the Household Income generation project. By end of year 2006, we had total revolving loan of USD 4,500 in two sub counties (Wera and Abarrilela sub counties) in Katakwii district.We had a total of 120 loan beneficiaries. This is far less investment.We wish we could do more.

The rebel outfit, the Lord's Resistance Army (LRA), has been a menace in Northern Uganda since 1986. These are simply a bunch of bandits and occult practitioners without any political agenda, whose major claim is the restoration of the rule of the Mosaic Ten Commandments.

Yet in effect, they are are the gross violators of what they claim to be restoring: Atrocities including body-part mutilation, mass abductions of children to be conscripted as child soldiers into their ranks and sex tools for their commanders, gruesome murders plus other forms of gross degradation of humanity are synonymous with LRA.

Because of that, over 98% of the population in the far North are hardened in Internally Displaced Peoples (IDPs) Camps. The regions heavily affected are the Acholi and Lango sub regions where any form of growth and development is at a standstill.

From mid June, 2003 LRA unfortunately though, spread this mayhem south words to the Teso sub regions. The districts of Katakwii, Soroti, Kumi, Amuria and Kaberamaido were immediately affected. Just like the far North, people scampered for safety in IDPs camps and other safer districts. 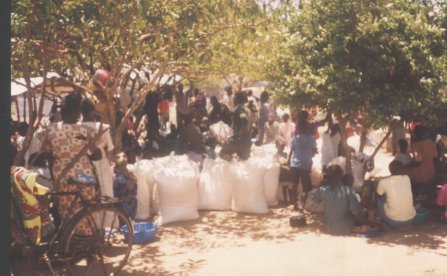 RTM giving out relief at the Displaced Persons Camp

The Teso sub region is Revival Time Ministry's stronghold, therefore LRA incursion, though for a short time, reversed and damaged the impact of our poverty alleviation efforts. Nevertheless, we stood with both our beneficiaries and potential beneficiaries to ensure the basics of life like food is supplied.

During the time of active military confrontation between LRA dissidents and combined forces of the Uganda Defense Force and the Local Peoples' Militia, Revival Time Ministry participated actively in humanitarian network which included local churches and an other international humanitarian organization. We ensured that we all worked without duplication of efforts to ensure that all people in camps remained alive. With permission from our partners by then, we diverted all funding to relief work to serve our quota which included the supply of milled maize flour and dry beens to specific locations in the district. 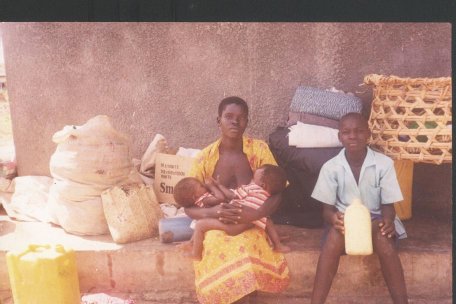 a woman with twins starving in the camps

However, when the the conflict receded as a result of successful military operations on side of government and her ally around end of 2005, we actively in got involved in resettling people back back to normal life. Among the many IDPs camps, probably in hundreds, doted in Teso, sub region, we took up Obalanga IDPs camp in Amuria District. We served 3,000 Households (approximately 20,000 individuals) with carefully arranged Resettlement Kit given below. Each household received the following Kit:

(1) One Bag of high yielding and drought resistant Cassava stems.

(2)A pair of basic farm implement such as hand hoes, machetes, axes, etc.

We live and work in communities ravaged by conflicts, HIV/AIDS epidemic and high levels of poverty. It is quite common to witness potentially gifted girls drop out of school due to lack of school fees caused by either the loss of a parent(s) due to an HIV infection, fall as a victim of some war or simply succumbed to easily treatable disease due to poverty, or the family is just crippled by abject poverty.

Such girl children (girls) falsely tend to believe that marriage is the easy way out. Such marriages are shoddily arranged to the benefit of the some distant relative of the girl who must seize the opportunity to extort every wealth from the boy in form of dowry or bride price. The bride price items are mainly cows, goats, some cash and other gift items.

Usually within a short time, and to the surprise of the girl, the vicious circle of extreme need and suffering is repeated in full blast, moreover with additional demands such as responsibility associated with upbringing of children and stress related to bad marriage.

Although we have not run a formal Girl Child Educational Support programs, we have been actively assisting potentially gifted girls fulfill their dreams through informal, and staff-personal financial support. Members of RTM staff have often relinquished portions of their own support to support a needy child go to school. We have also been able meet some cases through willing friends to contribute a portion of fees and requirements of the children we have earmarked for help.

A total of 12 women have benefited from this program and are quite successful professionally. At the moment we have four who are due for university education and they have been under our care for some time. There are other two who have approached us for possible assistance. Their details including needs, education duration will be shown in the prayer prayer requests.

Under this program, we are seeking funding to run vocational training institute for girls.Our target group are the single mothers and school drop-out due to various reasons.

The institute will help young women acquire skills in Tailoring, carpentry, sewing, Home Economics, construction, etc. If all proceeds as planned, the school could open late this year with the first group of 30 women. The institute will be adjacent to the Discipleship school base on our 5 acre land in Soroti. 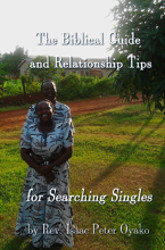 When looking for Christian books or products, head to Christianbook.com Home Here's a few links to some special pages on their site;
Giveaways - Great Deals - Gifts - Devotionals